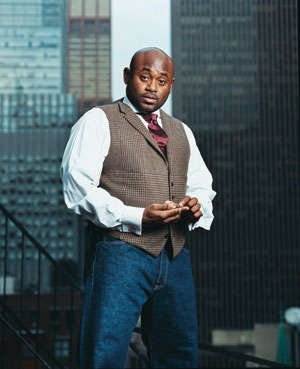 NEW YORK Steve Stoute, the 38-year-old CCO of Translation Consultation & Brand Imaging, launched in 2004, has been building brands since he was barely out of high school. But the former record executive — who once managed artists such as Mary J. Blige and Nas — still considers himself an advertising neophyte.

“I really am a novice,” says Stoute, who despite his modest characterization has built a lucrative career connecting brands to the much sought-after hip-hop-inspired youth market. In fact, he’s being honored by the American Advertising Federation in November with an induction into the organization’s Advertising Hall of Achievement.

“It’s something that took me by surprise,” says Stoute of the honor. It shouldn’t have. Stoute, who earlier this year launched Translation Advertising with Jay-Z — as a division of Translation Consultation & Brand Imaging — has leveraged the increasingly smitten relationship between Madison Avenue and the entertainment business into a lucrative career. His matchmaking efforts over the years have paired Jay-Z with Reebok, Justin Timberlake with McDonald’s and Gwen Stefani with Hewlett-Packard.

Most recently, Stoute paired Wrigley’s with artists including Chris Brown to help rebrand its chewing gum products. He commissioned the singer to revamp the brand’s classic Doublemint jingle, which was released first as a four-minute single, “Forever.” (The blogsphere subsequently lit up with fans angry they hadn’t been told about the Wrigley’s connection.) Wrigley’s new campaign also includes revamped jingles for Big Red by Ne-Yo and for Juicy Fruit by Dancing With the Stars contestant and country singer Julianne Hough.

With no formal business training, Stoute relies on instinct. He says he developed his insight into consumer behavior by watching people window-shop. “I’ve always paid attention to what people pick up and put down,” says Stoute, whose client roster includes State Farm, Samsung and General Motors.

It was Peter Arnell, founder of the Arnell Group, who believed Stoute could give traditional advertising a nontraditional spin. In 2000, Stoute left the music business and became a partner at the agency. It was there he started working with Reebok, which he helped relaunch in 2003 with a new product line and an ad campaign with Jay-Z, whose S. Carter Collection by Rbk helped reconnect the brand with urban culture.

“The client results, selling product, means much more to me than awards and things of that nature,” says Stoute. He credits his relationship with his Translation partners, Charles Wright, chief strategy officer, and John McBride, group strategy director, for his success. “They shape my vision tremendously,” he says. “It all starts with strategy.”

Currently, Stoute is working on a State Farm campaign with LeBron James and what he calls a “groundbreaking” effort for Samsung, which will debut during New York Fashion Week in September. It pairs the brand with Valentino and Conde Nast.

Celebrity endorsements, says Stoute, have changed since the time that smiling while holding the product and then receiving a check were the extent of the deal. Now, he says, “product endorsements are about product development and new-product creation all the way to a traditional endorsement model and everything in between.”

And “selling out” today, he adds, means creating inauthentic relationships between pop culture and product. The most successful relationships, he says, come from brands and artists viewing themselves as true business partners. “Artists want to be more responsible for the final outcome,” he says.

Education: Stoute, who grew up in Queens, New York, attended five colleges in two years, searching for “something that made sense,” he says.

Career: At 19, Stoute began working in real estate and invested in the music business, putting artists like Kid ‘N Play in the studio and on the road. He became a road manager, artist manager and A&R executive, and has worked with stars including Mariah Carey, Eminem, Jay-Z, Nas, Enrique Iglesias and U2. “In working with these artists, you learn a lot about branding, but in the record business we never called it branding,” says Stoute. He worked at Sony Music and Interscope Records before partnering with Peter Arnell of The Arnell Group in 2000. In 2004 he launched Translation Consultation & Brand Imaging, which was acquired by Interpublic Group in 2007.

Extra curricular: This year, Stoute co-founded the Foundation for the Advancement of Women Now with Mary J. Blige.