Imagination. It’s a wonderful thing. All those years ago the Jack Kirbys and Joe Kuberts of this world dreamt up some pretty far flung stuff. These guys conjured space operas that take place across a multitude of dimensions, without breaking a sweat. Their sense of what’s poppin’ in the streets, however, occasionally left something to be desired. Over the years, spandex, leather and spikes have been indispensable.

Those impossibly proportioned do-gooders need to be properly outfitted for anything that is thrown at them in the next 30 days. But the times they are a changin’ (whether or not the characters are). As a maven of style, Format thinks it only right, at this time to bring you a rundown of comic book fashion triumphs and trainwrecks. 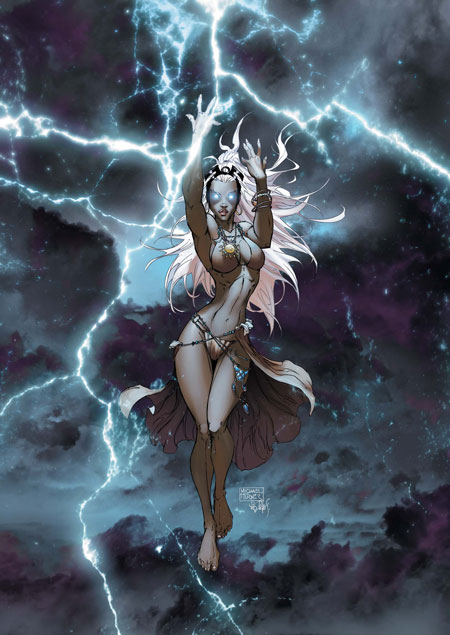 Ororo Munroe is a dime. Letâ€™s get that clear before anything else is said. Halle Berry played her, for Godâ€™s sake. She is also one of the most fashion conscious of Professor Xavierâ€™s students.Â  She rocked big hair when Tina Turner was making it cool. She changed up her whole steez in the 80â€˜s – trying on the punk aesthetic for size with a Mohican and a tasseled leather get up. These days, she can be seen controlling the elements in an off the shoulder number, which is sufficiently regal for her latest role as Queen of Wakanda since The Black Panther decided to â€˜put a ring on itâ€˜. 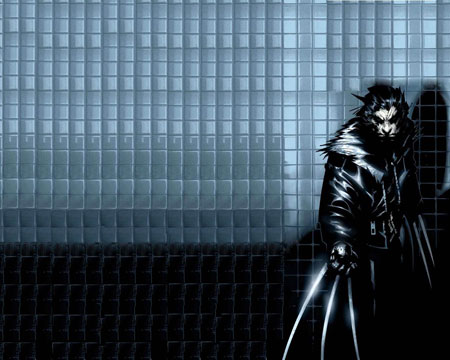 Being alive for over 200 years, you would think that a man would have time enough to commit the odd fashion faux pas. Yet Mr. Howlett has adapted, taking cues from his surroundings. Yes, he started out wearing velvet suits in the late 1800â€™s but even â€™The Best There Is At What He Doesâ€™, was dressed by his parents at one point. He had the Japanese outfit that made him look like an anime cat in his years wandering around Asia and the use of brown on his alternate X-Men outfit in the 80â€™s would also have been good for hiding those tough dried on bloodstains. His haircut, while not exactly changing with the times, is a classic, although one must wonder whether hair that pointy is a result of the mutant gene or buckets of gel. On top of that, he doesnâ€™t really get enough credit for managing to match everything he wears with foot-long indestructible metal claws. 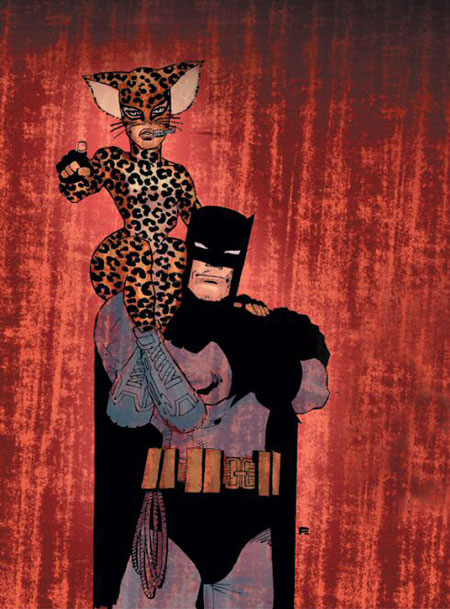 The daughter of two Gotham based stoners, Carrie took the initiative when it came to working with the Batman. Not only did she save the old cootâ€™s hide when he was about to be “sliced and diced”Â by the leader of the Mutant gang, she made her own Robin uniform. In her later teens, she graduated from the traditional sidekick outfit, to an all-in-one leopard skin jumpsuit, complete with mask, cat ears and whiskers, better suiting her Catgirl alter-ego. The pop-out roller skates are a welcome touch of kitsch. 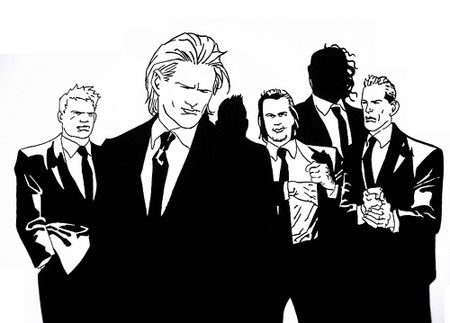 Agent Graves’ band of not-so-merry-men are known for their trademark black suit/white shirt/black tie combo. They’ve taken the whole ‘noir’ thing to another level in the course of their work. Not only do the suits look cool in a Hong Kong Cinema kinda way, but they don’t ever seem to get messed up. Whether they’re dropping old ladies off multi-storey buildings, hacking child abducters up with an axe or ordering tequilas in a dive bar, the Minutemen exude a murderous panache not seen since Resevoir Dogs. As many characters have learned, if you meet a Minuteman once, he may well be the last person to see you alive. Maybe they leave the house for work in the morning dressed for a funeral. At any rate Lono, aka The Dog is the only Minuteman exempt from the dress code, but he’s also a psychopath (moreso than everyone else) so the union rep probably lacked the heart/balls to tell him to shape up. 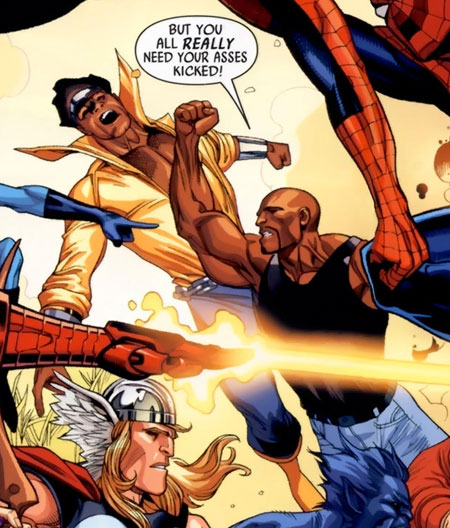 Sweet Christmas! After ditching the disco era canary yellow shirt, tiara and pirate boots of his â€˜Hero For Hireâ€™ days, Luke Cage has settled into a modern style of dress. Functional yet casual, the man with unbreakable skin can now be found leading the New Avengers into battle in jeans, a wife beater and Timberlands. Sure, the Skrull can duplicate the powers of every hero on Earth, but if The Secret Invasion proved anything, itâ€™s that they have a tougher time when it comes to imitating that world famous Harlem swag.

The misanthropic scourge of the New York underworld teams a trilby with a Macintosh, scarf, pinstripe purple trousers and of course his trademark bespoke mask. Practical for both visiting dingy waterfront dens of the criminal element and confronting superheroes apparently gone mad in their secret lairs. When offered some sort of protection against the bitter cold of the Antarctic by Nite Owl, Rorshach declines stating simply – â€œFine like thisâ€. He knew exactly what he was talking about. 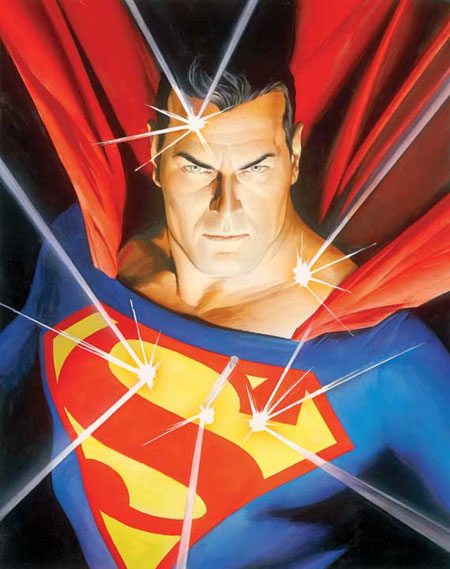 The Man of Steel has become renowned for his classic primary coloured get-up, but is not afraid to experiment a little when it comes to his duds. First off was the fetching black and chrome number he wore upon his return from the dead in the 90â€™s. Then there was the containment suit that he sported after he became pure energy and finally the Godfall suit that he wore for his adventures in the bottled city of Kandor. The House of El just keeps on cranking out the classics. 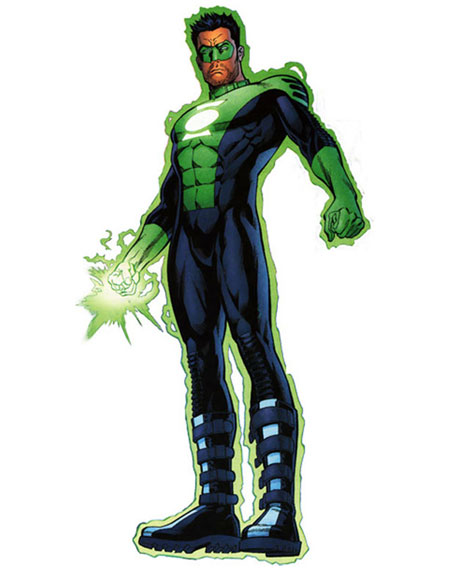 The latest in a long line of Earthâ€™s guardianâ€™s appointed by little blue men on Oa, Kyle has taken over the mantle previously held by such fashion-forward characters as Hal Jordan, Jon Stewart and Guy Gardner (who looked exceptionally â€˜Adam Antâ€™ during his â€˜Warriorâ€™ years). With the ability to create anything he can think of using his power-ring must be a huge help in the morning (as long as it comes in green). Rayner has updated the classic Green Lantern uniform and raised the Corpsâ€™ standard for the 21st Century. If only he could pass some tips onto Mogo, the planet sized Guardian of Sector 2261, who dresses like a giant pool ball. 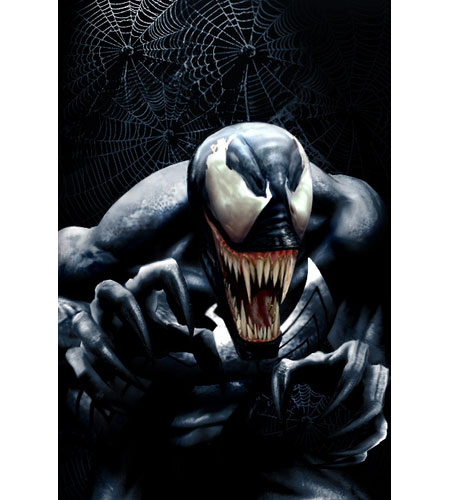 The classic symbiote outfit lacks the kiddie-pajama feel of the Peter Parkerâ€™s stock Spiderman garms. On the downside, it takes over the wearerâ€™s brain. Itâ€™s also vulnerable to loud sounds, which means that wearing this get-up to the club is definitely out. Proof that black,(with several jagged teeth and an overly long tongue), is always in style. 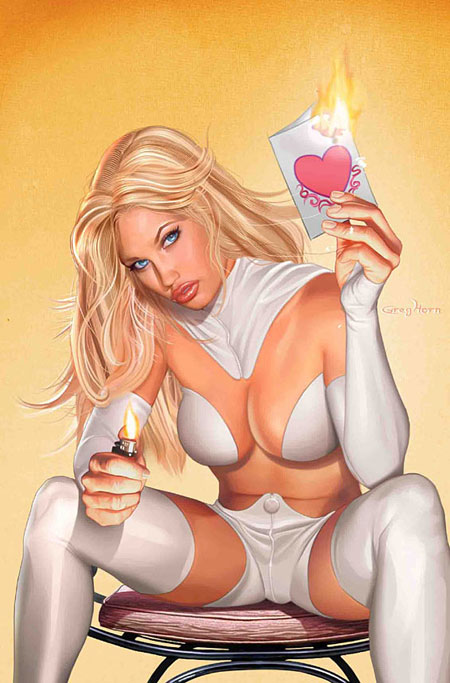 Her secondary mutation allows her skin to diamond, instantly solving any accessory worries. Her fondness for hot pants, plunging necklines and thigh length boots, which have led to several catty comments from her female teammates, in the past, make her a shoe-in for our top 10 list. 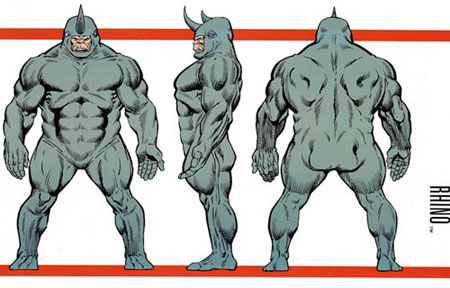 It is definitely more than a little gauche for a grown man to be wearing a romper suit, with or without a rhino horn attached. â€˜Nuff said. 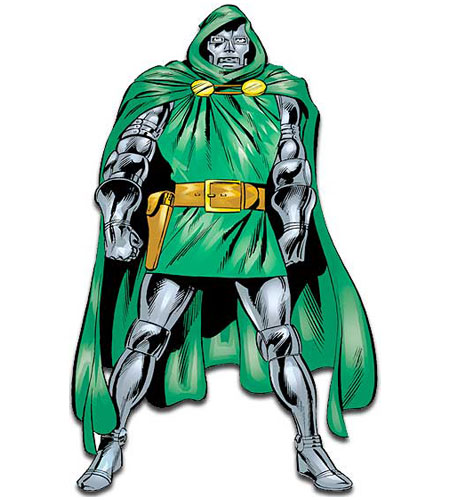 Yes, the mask is iconic, but tunics are so â€˜third Century despotâ€˜. As powerful as he may be, Victor Von Doom could do with a stylist. But given his track record, that arrangement would end with the words â€œDoom does not care for your man bagâ€ and some poor soul being fried alive where they stand. 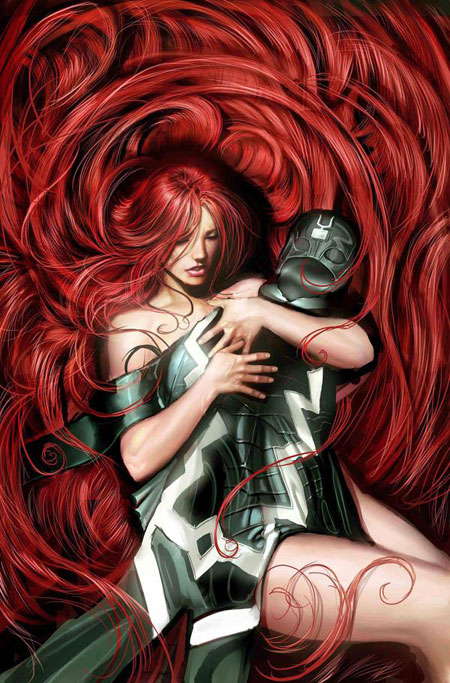 Medusa of The Inhumans

Possessor of the Living Weave, a ginger Amy Winehouse beehive that extends to 6 feet and can be used to hurl objects at enemies. Her husband and King of the Inhumans, Black Bolt cannot speak without causing a cataclysmic amount of damage, so his thoughts on the monstrous â€˜do may never be revealed. 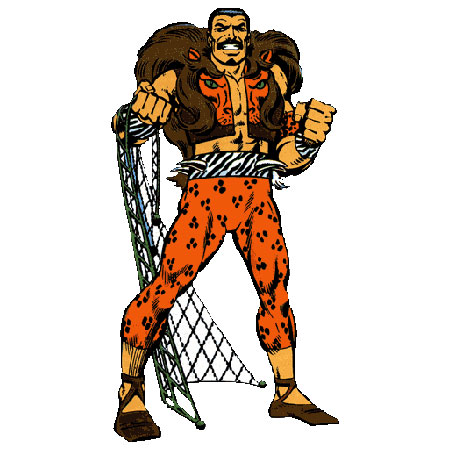 Itâ€™s all well and good being able to track any prey across any terrain, but Kraven should have definitely looked in a mirror before leaving the hut. His work duds are a mixture of Spandex and animal fur not seen since the early days of Grandmaster Flash and The Furious 5. And on top of all of that, he wears slip-ons that resemble ballet shoes. 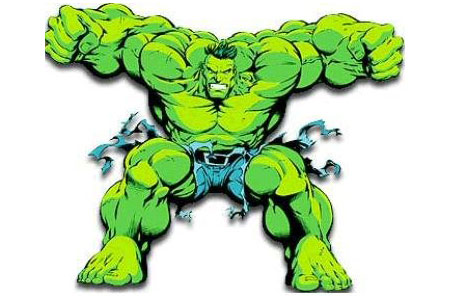 He changes skin colour when ticked off, which may lead to unexpected clashing if he chooses the wrong colour for his outfit of the day. However, Dr. Bannerâ€™s raging alter ego ends up in ripped denim more often than an 80â€™s rock band. Recent intergalactic forays in the ‘Planet Hulk’ saga have seen him worsen matters by getting deep into the whole ‘gladiator’ aesthetic. 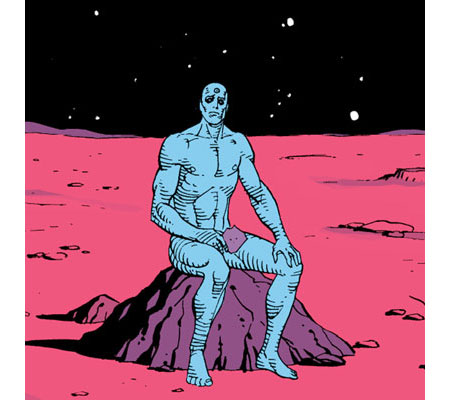 Sure, he can see his future and past simultaneously. He can synthesize enough lithium to power the electric cars of an alternate 1985, but he refuses to wear clothes around the house. The blue fella would rather let â€˜the boysâ€™ hang out than deal with the thoroughly human concept of at least putting on a pair of boxers after stepping out of the shower. 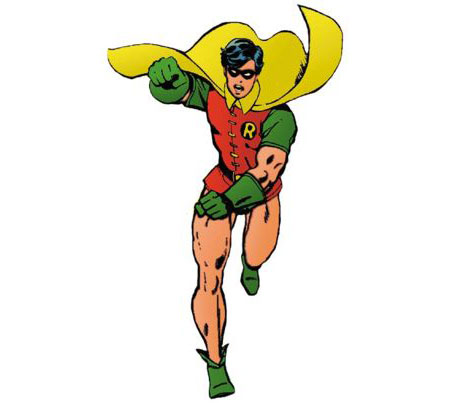 While undoubtedly a great guardian of Gotham City, Batman is definitely more concerned with crime fighting than he is with fashion. Odd, because itâ€™s not like he canâ€™t afford to dress well at work (the infamous ‘Bat nipples’ on Val Kilmer’s suit in Batman Forever are considered non-canon). Heâ€™s been accessorizing with a yellow belt since the 1940â€™s. Heâ€™s also made the various Robins wear an unflattering brief-waistcoat-pixie boot combo, which pretty much adds up to child abuse. 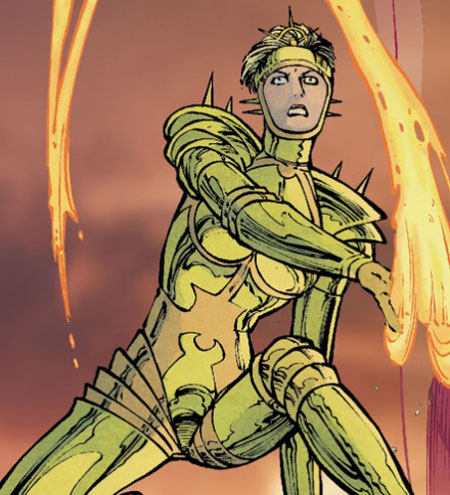 Thena from the Eternals

Proof positive that life, as a being of unimaginable power, does not automatically mean that you will be blessed with a sense of style. Hence, the all in one jumpsuit that looks to be made from solid gold, last seen in photos from Studio 54. 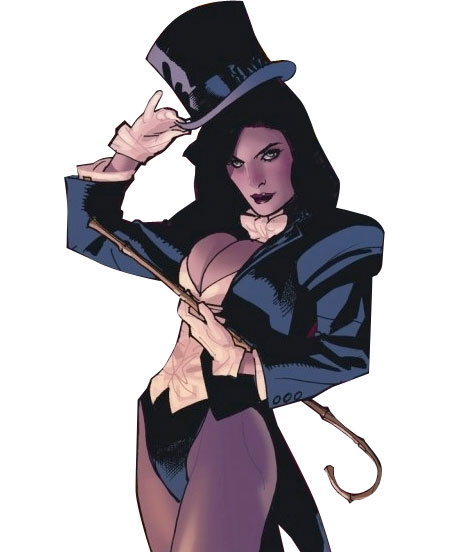 Who teams a top hat and fishnet tights? A sophisticated pantsuit in dark tones, charcoal gray for example, would work wonders for her as she has a long legs and a great figure. As it stands, she looks like she left the house for a Magic Circle meeting and forgot to finish getting dressed. Better that than a spangly Siegfried & Roy ensemble, howeverâ€¦ 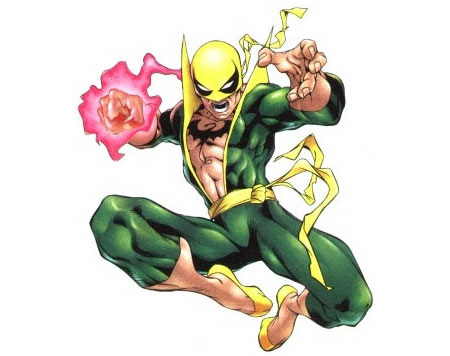 Does he get dressed in the dark? Hitting the streets in a seemingly random collection of materials and styles thrown together, Danny Rand still has a long way to go. CombiningÂ a sash, a du-rag, three quarter length Capri pants and chancletas, Iron Fist was definitely at the back of the line when they handed out superhero outfits.