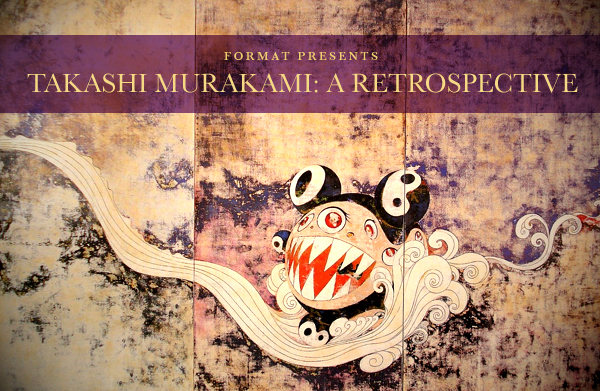 Heralded as the â€˜Andy Warholâ€™ of Japan, Takashi Murakami has made a name for himself by flooring audiences worldwide with his sculpture, paintings and prints, videos and even handbags. Taking the lowbrow and marrying the concepts with art has never been more lucrative and in demand. However, there is more to this artist than big-ticket luxury goods and mouse pads.

Although his work appears to be cute and lighthearted, there is an underlying message in each happy-go-lucky grin or eager glance from his little creatures. Here is a comprehensive timeline of Takashi Murakamiâ€™s artistic careerâ€”work, exhibitions, education, collaborations and important datesâ€”incorporating every facet of his artistic endeavors. Know him by heart; your history books soon will. 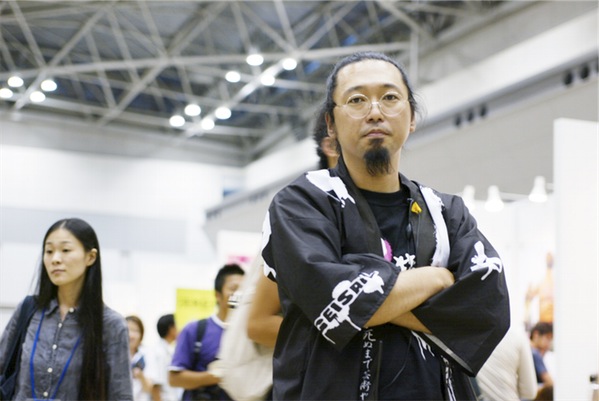 This is the year that starts it all. Tokyo hosts the birth of Takashi Murakami on February 1stâ€”little does anyone know, heâ€™s to become one of the greatest contemporary artists of our time.

â€¦and a Masters of Fine Arts two years later. Murakami proves once again you must know the rules if youâ€™re inclined to break them.

Newly educated, Takashi Murakami goes on to exhibit at the Hosomi Gallery in Tokyo, often returning in the future.

By now, Murakami starts branching out. He creates Signboard TAMIYA, a large multi-panel canvas. Not only is this a huge undertaking, it begins his experimentation with branding, literally and economicallyâ€”the seeds are sown and eventually he will become known as the â€˜Andy Warhol of Japan.â€™ Tamiya is an established model kit company, and Signboard resembles its logoâ€”in fact, the piece itself is literally â€˜brandedâ€™ with a hot iron.

This experimentation continues the following year with the creation of Signboard TAKASHI. He follows the same pattern, replacing the colors to yellow and green, nixing the iron-brandingâ€”appropriating their slogan, â€œfirst in quality around the world.â€ 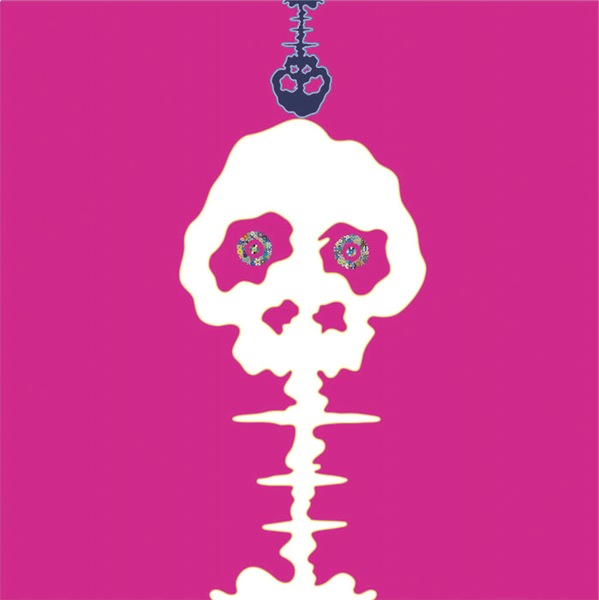 Murakami completes his PhD from his alma mater and later stages an installation at the Sezon Museum of Modern Art called Time Bokan. â€˜Time Bokan,â€™ a Japanese animation series that ran for one year in the â€˜70s, ended every episode with an apocalyptic explosion and the series of his skull-shaped mushroom clouds harks back to it. He also paints DOB Genesis this year, among others, symbolizing the influence of the American on post-war Japanese culture. 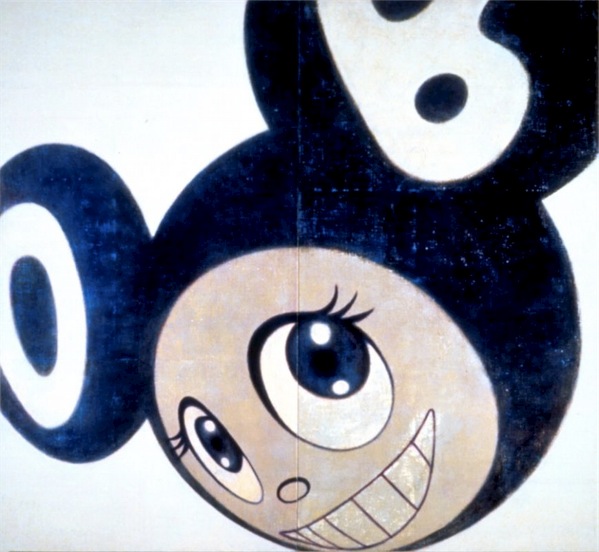 Between ZuZaZaZaZaZa and And then, and then and then and then and then, a print that will later be found repeated in every different color, Mr. DOB stays a main focus of his work. Resembling Mickey Mouse, the character brings attention to both Japanese and American animation. In 1994, heâ€™s happy and cute, but his transformation into a surreal mess of sharp teeth will slowly take place over subsequent years. 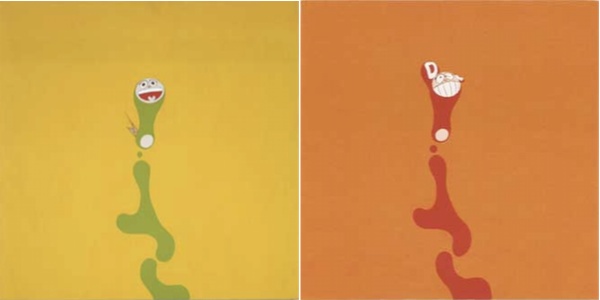 If Mr. DOB is in fact Murakamiâ€™s alter-ego, 1995 was devoted to his own personal development. Visiting New York, alone and broke, the paintings he produced (on a shoe string) all starred this little character. Whether in the Stew series (red, blue, and yellow renditions) or an entire installation devoted to him at the Staatliche Kunsthalle, the characterâ€™s various manifestations capture different sides of the artist. The Stew series was made using only eight dollars; the result is so minimal his homesickness is tangible. 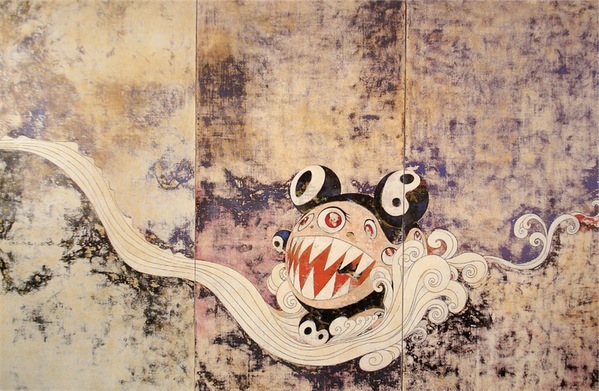 He founds the â€˜Hiropon Factoryâ€™ studio in Saitama, Japan. Though only a fledgling at this point, the studio hires assistants to expedite art production. An example of what comes out of this factory is a very japoniste DOB in 727â€”a three-panel acrylic-on-canvasâ€”the first painting of Miss koÂ², and DOB with Flowers. Unlike Stew from the previous year, DOB is happy and cute in this depiction (set in familiar territory). 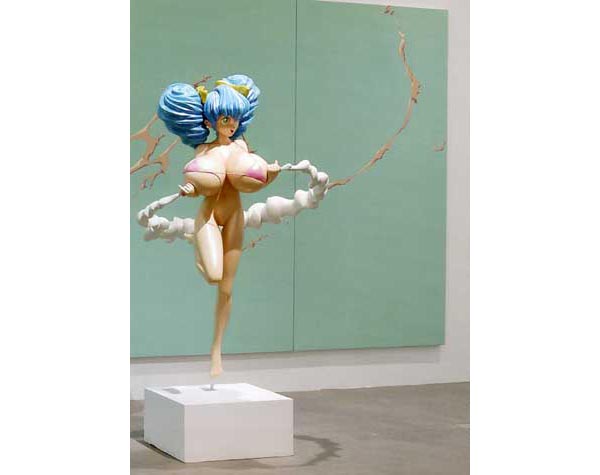 This year, Miss koÂ² and Hiropon transform into sculpture and Project koÂ² is put on installation. The sculptures are symbolic of otaku culture and sexual (and commodity) fetishism. Hiropon is another word for methamphetamine and the sculptureâ€™s focus is on its supernaturally endowed mammary glands and their secretions. These hyper-sexualized sculptures are extra large otaku figurines; this year everything is magnified versions of mass-consumable items. 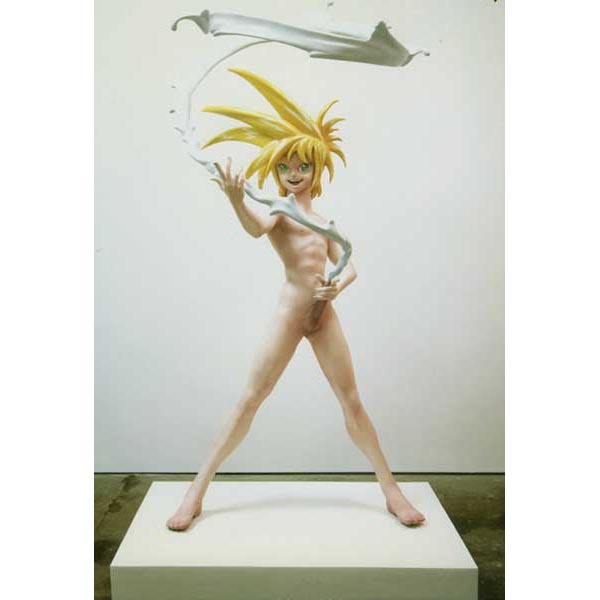 My Lonesome Cowboy and Cream, Milk, and Spring Liquid (paintings of spraying â€˜fluidsâ€™) further accentuate his ideas of sexual fetishism. And as those ideas grow, so too does the â€˜Hiropon Factoryâ€™ expand: Murakami opens the â€˜Hiropon Factory New Yorkâ€™ studio. DOBâ€™s disposition is happy, but gradually getting more grotesqueâ€”with pointy teeth and surreal environments (like in Castle of Tin Tin)â€”and Murakami starts using his anthropomorphic, smiling flowers. When the older DOB appears occasionally in these abstractions, he looks worried and out of placeâ€”like a personal transformation is slowly pushing the Mickey-Mouse-esque version out.

Second Mission Project koÂ² (Human Type) witnesses another installation and DOB in the Strange Forest is set up at Art Basel in Switzerland. Once again, DOB looks bewildered while PO+KU Surrealism DOB in its various colors frames it (the newer, grotesque DOB staring the old one down). He completes Super Nova, among Murakamiâ€™s greater accomplishments, depicting a myriad of mushrooms on a silver canvas (reminiscent of Warhol). Decorated with mushrooms inspired by Ito Jakuchu’s and mushroom clouds instead of Elvis, both an icon and a pop crisis, Super Nova cements the mushroom as an icon and crisis of Japanese culture. 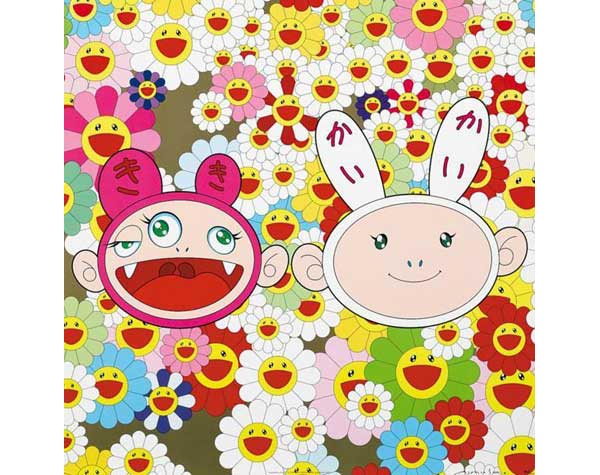 In the spring, a Hiropon web site launches, along with a handful of exhibitions. Kaikai and Kiki take over as the focus of his work and spiritual guardians; â€˜kaikaikikiâ€™ is a term used to describe the work of artist Kano Eitoku, meaning â€˜bizarre, yet refinedâ€™ and â€˜delicate, yet bold.â€™ Kiki is depicted with dopey eyes, but an alert third eyeâ€”a reference, perhaps, to drugs and perception. The artistâ€™s increasingly frequent use of silver canvases is an explicit return to nihongaâ€”the traditional Japanese painting style Murakami studied in depthâ€”and yet reminiscent of Warhol’s screen prints. 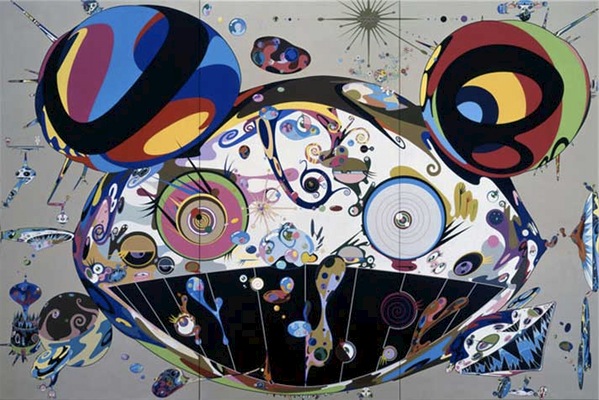 Murakami hosts the famous â€˜Superflatâ€™ exhibition, drawing an audience of 95,000 peopleâ€”with the goal to capture the flattened forms of Japanese art, and the â€œshallow emptiness of Japanese consumer culture.â€ Following this, Murakami registers Hiropon Studio under â€˜Kaikai Kiki Co. LLCâ€™ and, in the following months, opens two more studios. During the summer, he launches an i-mode web site and exhibits at the Museum of Contemporary Art in Tokyo. The Time Bokan series resurfaces in new color combinations and paintings like Tan Tan Bo depict increasingly surreal, multicolor DOBsâ€”Melting DOB D particularly, with a multicolor DOB melting down the canvas (evoking DalÃ­). 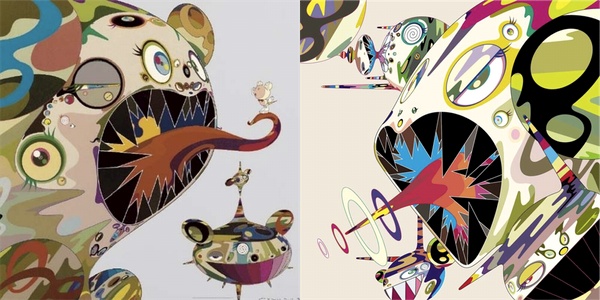 This year sees the first of many GEISAI conventions held to give young Japanese artists exposure, each one drawing thousands of visitors. Murakami makes two paintings in homage to Francis Bacon, in which the surreal portraiture is inverted to appear to be looking at Baconâ€™s own renditions of Dyer and Rawsthorne. In contrast to the grotesque characters of these paintings, Murakami creates three versions of his Flower Ball sculpture.

Working with Marc Jacobs designing purses for Louis Vuitton was a hugely successful venture and a very wise, consumable career move, establishing him as a household name. Murakami also tries his hand at animation with â€˜Superflat Monogram,â€™ an animated short marking the LV launch. The year is defined by â€˜Superflat,â€™ when the concept behind most of his art (the flattening of all sorts of artforms into one) is most pronounced.

Murakami establishes the â€˜Kaikai Kiki Animation Studioâ€™ in Tokyo and a web site for it. He also develops his Inochi sculptures serving to problematize the discerning of human from non-human. Standing about five feet tall, the sculptures embrace both human characteristics and cyborg-like technology, accompanied by a series of short videos putting the Inochi (lit. â€œlifeâ€) in a classroom setting and experiencing lifeâ€”from wet dreams to lactose intoleranceâ€”and complex emotions. The videos establish the Inochi as an outsider in modern life, but also as a terrifying metaphor for adolescence and puberty. The life-like, relatable sculptures incite in the viewer a sense of the uncannyâ€”repulsing the viewer, but recognizing it as â€˜life.â€™

Murakami curates â€˜Little Boyâ€™ for the Japan Society in New York; its namesake is the Hiroshima bombâ€™s codeword. The exhibition sets out to demonstrate the effect of the A-bomb on post-war Japanese popular culture. Murakami included other leading artists, both contemporary and past, involved in otaku culture to exposit its fetishistic and apocalyptic imagery. Recalling Murakamiâ€™s Time Bokan, where the tragedy is combined with the reference to a cartoon, the cultural ramifications of the bomb on Japanese culture are laid â€˜flatâ€™ in the exhibition: a demonstration of what Murakami refers to as the â€œtragic apocalyptic paradise that is Japan today.â€ 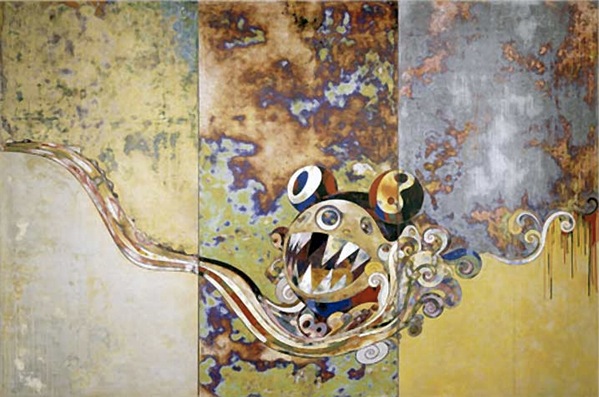 Along with two exhibitions and an installation, Murakami completes 727-727, a remake of the older 727. â€˜727â€™ refers to a Japanese cosmetic companyâ€”inspiring an examination of cosmetics as a consumable ordering principleâ€”but at the same time references Boeing airplanes, which have no bearing whatsoever on cosmetics (a concept that Murakami describes as â€œstupid,â€ but â€œcoolâ€). The paintingâ€™s background appears corrodedâ€”consisting of myriad layers of paint applied and subsequently sanded downâ€”recalling the bomb that was the focus of his work and curating the prior year.

I open wide my eyes but see no scenery. I fix my gaze upon my heart and That I may time transcend, that a universe in my heart may unfold (2007)

Kanye West and Murakami start collaborating; he designs the cover art for three of Westâ€™s singles, while also directing the cover art for the Graduation album. The same year witnesses I open wide my eyes but see no scenery. I fix my gaze upon my heart and That I may time transcend, that a universe in my heart may unfoldâ€”two portraits of Daruma, the Indian monk who introduced Zen Buddhism to China. Murakami also puts on the Daruma exhibition, â€˜Tranquility of the Heart, Torment of the Fleshâ€”Open Wide the Eye of the Heart, and Nothing is Invisible,â€™ at the Gargosian Gallery in New York. 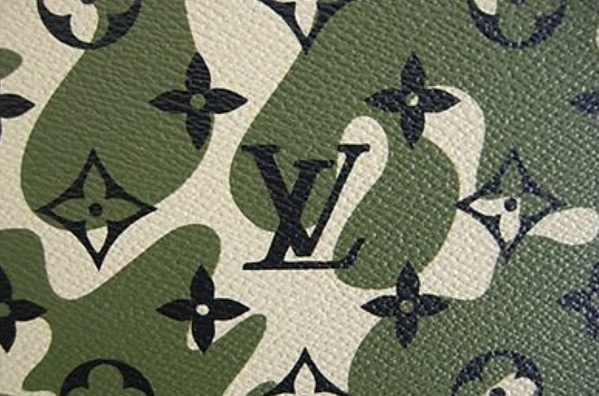 Murakami exhibits at many important venues including the Brooklyn Museum and the Museum fÃ¼r Moderne Kunst in Frankfurt am Main, Germany. Another milestone for the artist is the retrospective held at the MoCA in Los Angeles in which a Louis Vuitton boutique was established to sell his latest designs: â€˜Monogramouflageâ€™ bags. Sold exclusively at the show, Murakami once again proves himself to be a master of consumer goods.

In February, he exhibits at the Guggenheim Museum in Bilbao, Spain. He designs the first customized and â€˜designedâ€™ QR Code for Louis Vuitton. To celebrate the sixth anniversary of the initial LV purse launch, he also makes â€˜Superflat First Love.â€™ To boot, he has recently announced a LV sneaker and unveiled a Kanye West collaborative sculpture. Whatâ€™s next, weâ€™ll never know. However, it looks like consumables are his main focus.